Gain insights on how to enjoy life one minute at a time! 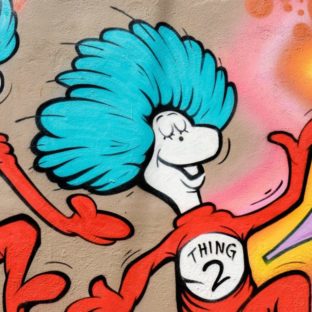 So what exactly are all these things? Things are objects that one need not, cannot, or does not wish to give a specific name to.

Do you remember Dr Seuss characters Thing One and Thing Two? They were released from a box that the cat brought in. Those Things later caused mischief by flying kites in the house which bumped the wall and knocked everything down in their path.

You could be dealing with a lot of things at the moment. The sort of things that jump out of boxes when you least expect it. It’s a strange time after all.

Stressing, wrestling, worrying, cogitating are a variety of things. Wondering when we’ll get back to something less like right now is a thing.

Maybe you are trying to get things into a routine – a little exercising, timing and better eating, improved sleeping. Sorting, arranging, organising. And yet finding and keeping a routine seems more challenging.

Wouldn’t it be nice to be seeing more people, socialising, celebrating, communicating face to face, hugging and laughing more?

This, at least right now, is easier said than done while we are quarantining. For some, it’s been all about reinventing.

Many are busy trying to secure a new job, applying and interviewing. Waiting, hoping and believing.

Are you working from home, perhaps? Sharing spaces. Pivoting and adapting with a little too much zooming. Noticing there are more distractions and a lot of these things seem to be blurring.

Travelling and holidaying might be something you are now dreaming of. Hoping it is possible again soon.

The combination of cooking, cleaning, baking, binging, gardening, renovating on top of all the other things, well that just seems tiring.

So, here’s the thing. Choose your things wisely. Some mean nothing, can be annoying and add no meaning.

If you are tired of juggling, know that sometimes it’s best to put things back in their box.

Send this to friend